• Madonna, Fingerless Gloves, and the Smartphone

Hello! Thanks for checking out my site. I thought a good way for you to get to know me better might be to write a blog. I am, we all are, more than one thing. What is revealed in my artist statement is just a tiny bit of me. I think the number one misconception about me is that I am a super serious person. Yes, I have my serious moments, but I think people confuse my earnestness, deep interest, and lack of upspeak (and possibly BRF) for solemnity. Inside I am a jokester. My years as a commercial photographer may have made me more disciplined, but I am gradually shaking off that suit of armor. With this blog, I am attempting to let the public into the private me. It may take reading a few entries to get the hang of me, and I hope you’ll be interested enough to keep reading.
- Jen

Are you a New Years resolution maker? I am not. I don’t know, there’s just something about it that sounds as though you’re probably not gonna stick to it before it even starts, and it usually includes NOT doing something. Yes, the word resolution is a very definitive word, but it’s sorta turned into a wishy washy, “I sorta wanna do this thing, but I probably won’t,” thing. Do you disagree? It’s okay if you do. I won’t be mad. Anyway, I did make some goals at the beginning of the year. Yes, it’s different! I’m telling you it is different for me. One of my goals was to show my art in New York City this year.

One of the first shows I applied to was the MvVO Ad Art Show 2019. I submitted four paintings and all four were accepted. Not only that, but I was given a solo show. Not only that, but my work is also to be featured in the Oculus at The World Trade Center. Oh, and I get to be on Artsy.net. Also, my art was featured in an article about the Ad Art Show on Artnet.com. Let me explain what all this means. 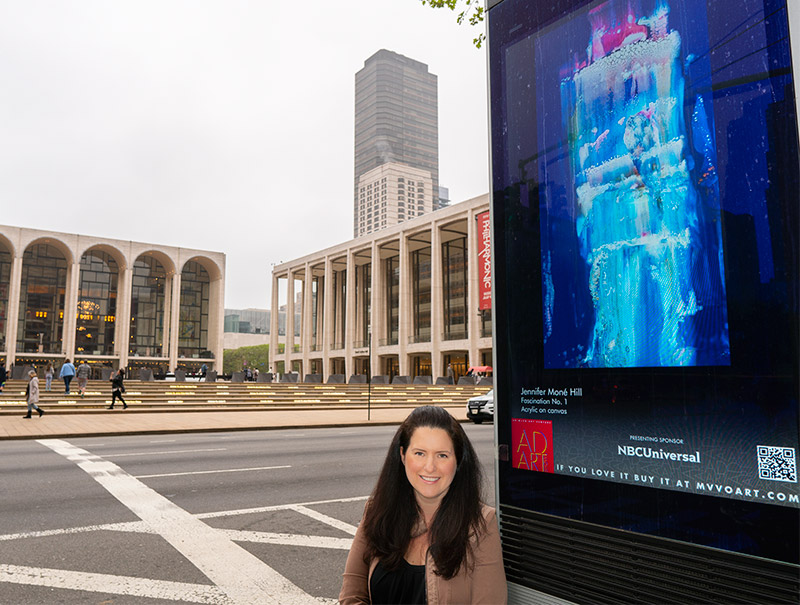 The Ad Art Show is a digital show. Instead of hanging the art on a wall in a gallery, in one location, MvVO opted to move the show onto the streets of New York, displaying the art on 140 LinkNYC digital displays, May 1-4. I was one of the select artists chosen to have a solo show on my own LinkNYC displaying all four of my paintings on a repeating slide show. I got a fantastic location in front of Lincoln Center, in a little wedge of a park called Dante Park. Beside my LinkNYC show were tables and chairs set under tall trees. It is a truly lovely spot in the city.

The Oculus is probably the nicest train station I’ve ever been in, and includes a shopping mall. Adjacent to Ground Zero, it was designed by Spanish architect Santiago Calatrava to resemble a dove taking flight. Every year on 9/11, the center spine of the structure opens to let the light in as a symbol of the light that continues to shine through tragedy. Within this amazing space are massive screens, and from May 1-31, a selection of art from the Ad Art Show, will be on display on them. My art will be viewable to 300,000 people a day that pass through the Oculus. Amazing.

I’m still not big on resolutions, but goals, YES, they are important, fantastic, wonderful things to have. Listen kids, if you don’t have goals, you’re just floating. If you don’t dream big, that’s on YOU! So now I’m gonna go think on what my next goal will be. A solo show in an NYC gallery? Yeah, that sounds good. I’ll let you know…

Madonna, Fingerless Gloves, and the Smartphone

So I had a thought this morning. I think Madonna and her muses, or perhaps her stylist, created the void that manifested smartphones. In 1984, Madonna in her Borderline video wears fingerless gloves. Now I am pretty sure that she was not the creator of the fingerless glove. I mean they’re all seamed nicely like they were manufactured in some factory in China. They don’t look like she took a pair of scissors to them and made em herself. No one can deny that Madonna did make them popular though, in addition to her other style choices through the years. Madonna has influenced fashion, right. No one disputes that.

It started in the 80’s. She was so cool and so comfortable with her sexuality. Girls were cutting off glove fingers and tops, displaying both their fingers and their midriffs to be like M. (Side note, don’t you love that wonderfully old fashioned word, midriff? Back to cutting up clothing and accessories.) I distinctly remember parents being upset that their daughters were exposing their midriffs and fingers too! I mean fingers are an underrated sexy body part. Well, I mean once you put them into fingerless lace gloves, right? Maybe it was the black lace that scandalized the older generation. Precious innocent young people discovering their sexuality in such a vividly obvious way. It was hard to take I’m sure.

Cut to today. Fingerless gloves are very much a thing. I mean people actually wear them in winter. Confession, I’ve knitted more than one pair myself! (Though they are called fingerless mitts) Why? Why, wear the fingerless mitt/glove? Because you need your bare fingers in order to work your smartphone, of course!

So in the mid 1980’s. People start wearing gloves without fingers, seemingly only for the reason of looking cool like Madonna. Those bare fingers needed a reason for being. The muses saw this and bestowed the idea of the fingerless glove to the genius who started the whole smartphone movement, just so we would have something to do with our gloveless fingers. How long did that take? 25, 30 years?

People, I don’t know if I have 25 to 30 years in me to wait for you to catch on that those bare walls, need my art. So please hurry up and figure it out. I’ve got a backlog of painting ideas waiting to get out of this brain and they’ll need somewhere to go. I’m gonna finish my coffee now and get to work.

Wanna get updates on my blog posts, new work, and appearances? Subscribe here! 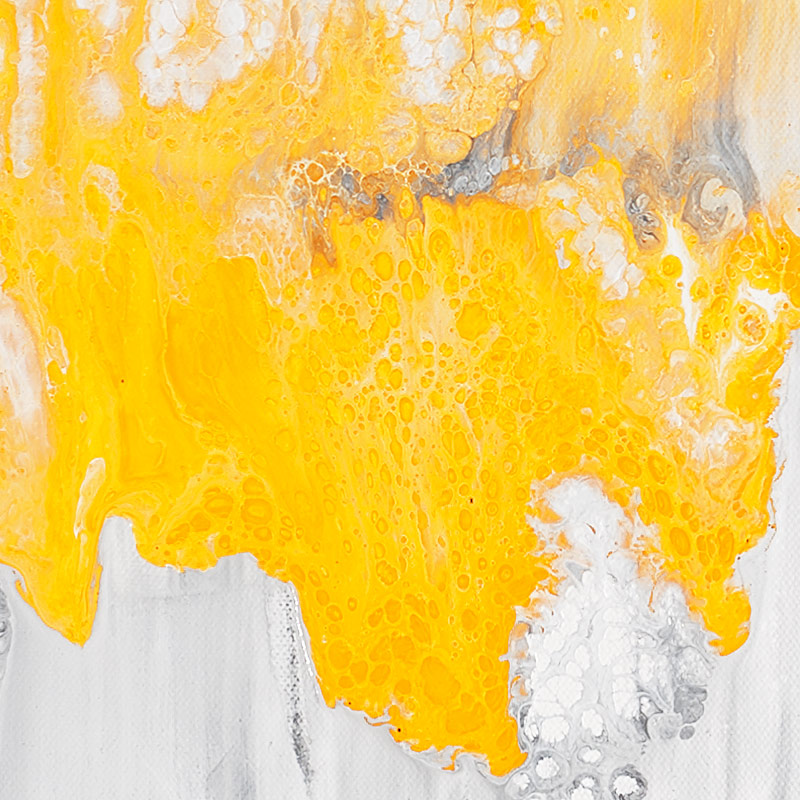 As an artist, I show my art as much as possible. I believe that art wants to be seen. When I was a child, I believed that my toys, especially the stuffed animals, wanted me to play with them. I felt bad if ignored them. They’re not fulfilling their destiny if they just sit there by themselves. So as an artist, I really don’t want my art to sit around not fulfilling its destiny! It must be shared, seen.

I participate in gallery, museum, and artist guild shows and go to opening receptions, where I enjoy meeting new people and chatting. I am often asked, “What is this piece about?” This is both hard and easy to answer. The easy answer is, joy. When I paint, I am tapping into that joyful feeling. It’s probably the number one reason I continue to paint and do it as often as possible. I always, always play music. I fluctuate between classical, (deep cello music of Yo-Yo Ma is a favorite), and hip-hop, and a bit of everything in between. You can be sure, there is mighty singing and dancing while I work. Tapping into that place inside where joy resides is key, and when those colors hit each other, whoa nelly! It feels like flying. 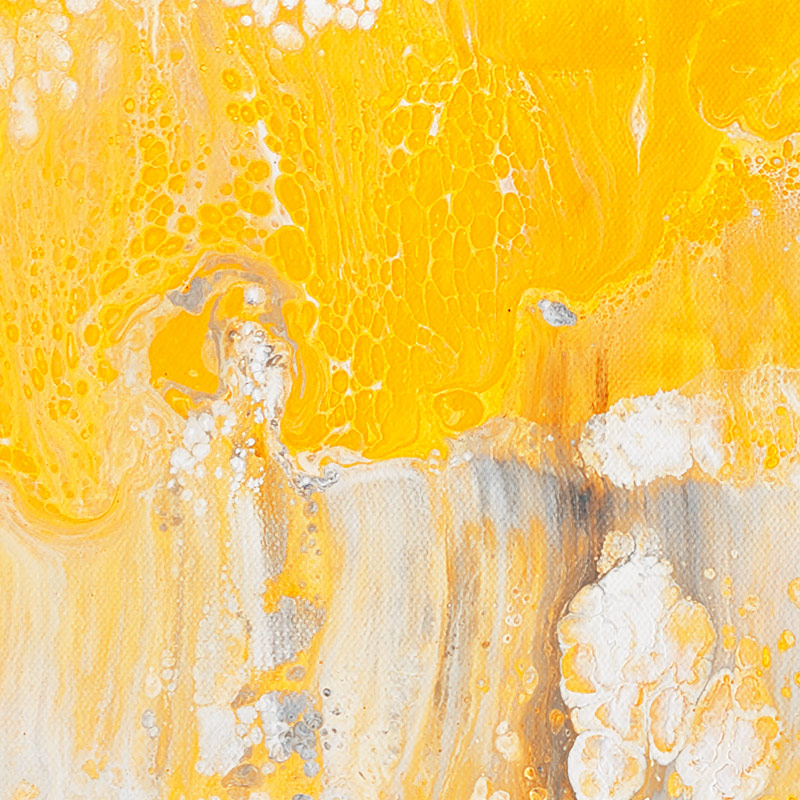 I also believe that I am not the sole creator of my art. I have partners. They are what I call the muses. They bring me ideas, not just when I’m in my studio working. All. Of. The. Time. They whisper in my ear, “Here put this color here, and this one here. Now swipe that over…” Then they ask me, “What does that remind you of? What do you feel?” Oh yes, that’s Sunday Morning. The warm yellow flows over, no covers, the cold gray of a winter’s morn. I’m in my kitchen, the trees that surround my house are bare, allowing the sun to beam through the window, quite blindingly. Sunday Morning, when the possibilities of the day are open to anything, but more likely my true desire is to stay there, in that moment, in my pajamas, sipping coffee, in my kitchen. 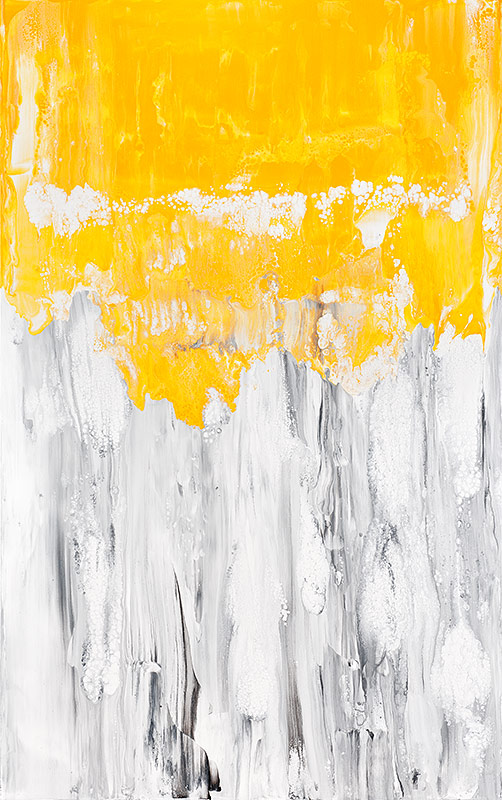 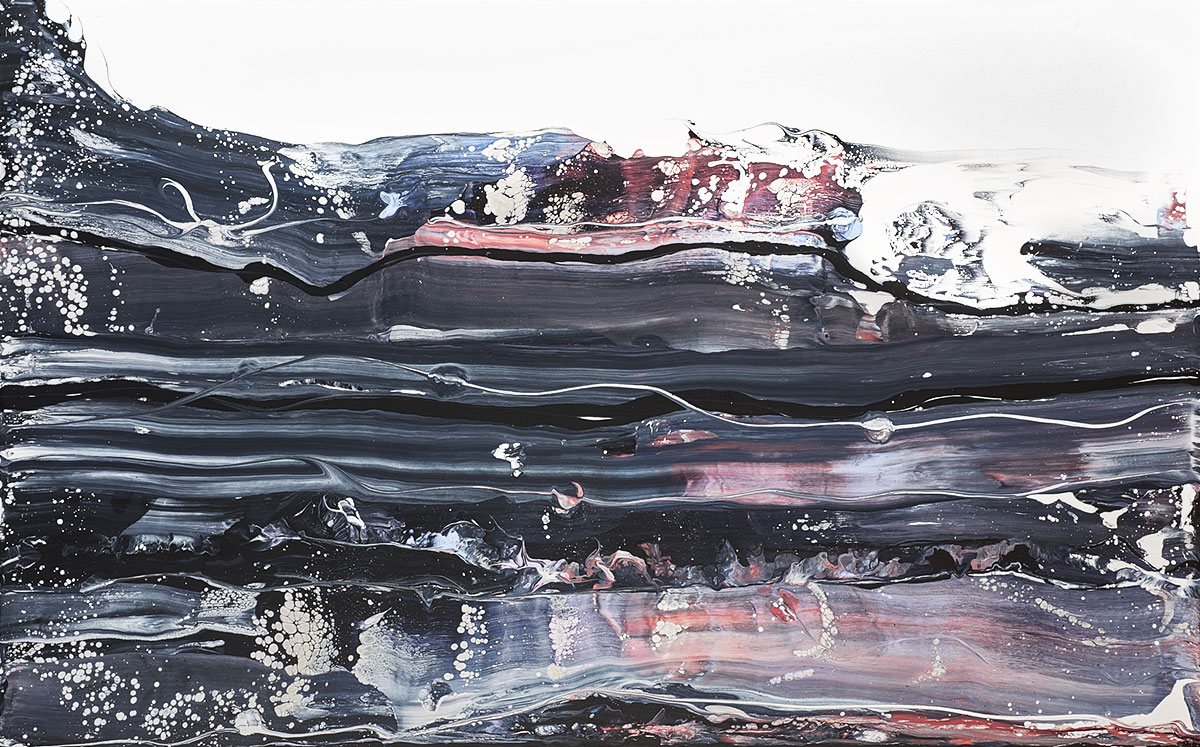 What fun to see my painting on the wall at the Mattatuck Museum! Stop in to see works by Jasper Johns, Alexander Calder, Bernice Abbott, and while you're at it, check out the MixMaster exhibit, with my piece Carbon Flux. Out of 290 entries, 33 made it to the walls of the museum. I am so excited to share this space with so many amazing artists! 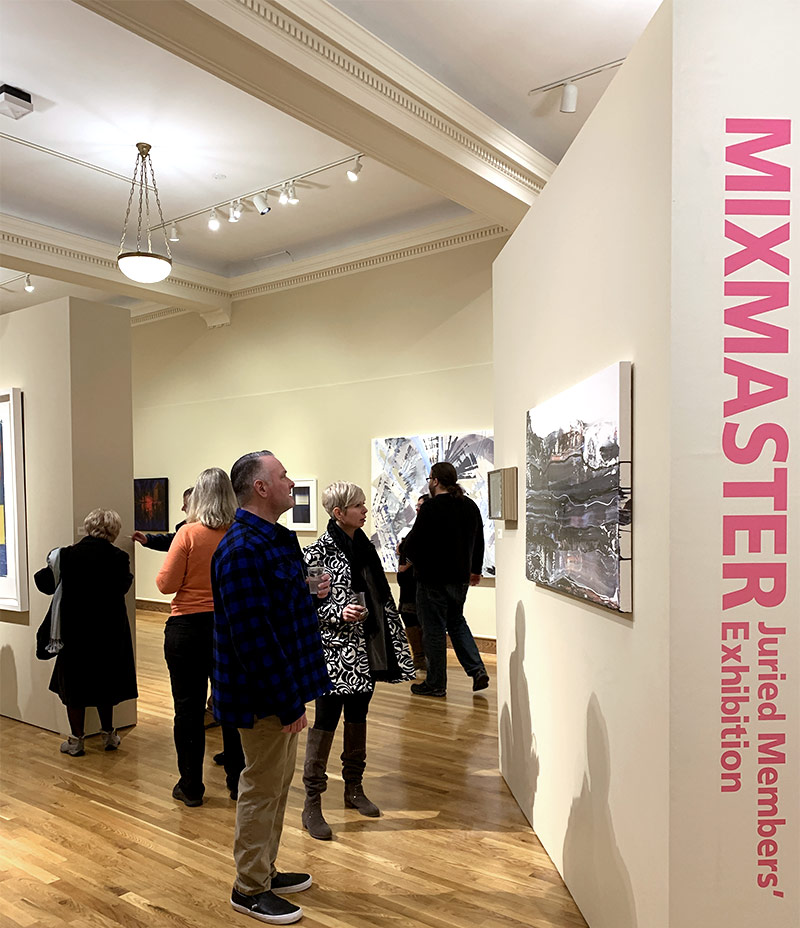 Carbon Flux in the MIXMASTER exhibition at the Mattatuck Museum

It was sort of surreal to be in a legit museum and walk around looking at wall tags. Hey, I learned about these artists in school. Now here’s my painting on the same walls! Wow! What a feeling! I don’t know if I could describe it to you other than it was like a dream. Although, I’ll admit, most of my dreams are the weird and not making sense kind. This was the best kind of dream and one that came true. It was reality.

Wanna get updates on my blog posts, new work, and appearances? Subscribe here!